UPDATE:  And so it ends.
http://www.washingtonpost.com/business/technology/yahoo-chief-executive-resigns-company-adds-new-board-members/2012/05/14/gIQAzfjaOU_story.html

It's very sad to watch someone's career, or even a company implode.  This unavoidable, and logical conclusion to a simply STUPID series of decisions, errors, 'blind eyes', and tragic group-think is neither the first, nor the last of it's kind.  This stuff happens at 'regular Joe's' level too, you just don't hear about it.

In the last week, I've screened - close to a hundred candidates, and of those, have uncovered 2 with serious material errors - outright lies - on their resumes.  First round screening, mind you!  We hadn't even gotten to vetting, and the lies were that blatant, as to be easily picked up on.  These are NICE people, who, for whatever reason have decided that it is OK to embellish.  Some say that as much as 40% of resumes contain such errors.

I don't know where society went so awry - it is easy to point to Bill Clinton, or Richard Nixon.....if the president lies, it must be OK.  If the presidential candidates exaggerate, stretch the truth....LIE  (and they're both doing it daily)...it must be OK for the 'average Joe' too.  Right?

NO>  Wrong is wrong.   Be yourself.  Be better than this sad trend.  We have all made mistakes - Lord knows I have.  We are only human.  Society may ask for, demand, or expect leaders to be 'Perfect' or 'Superhuman', but folks, this just isn't going to happen.  Let's try starting with the simple stuff.

Jamie Dimon had an actual fiasco this week.  http://www.washingtonpost.com/business/dimon-jpmorgan-was-sloppy-and-stupid/2012/05/13/gIQAHx0NNU_story.html  I won't go into a rant here about how the US Postal Service is perpetually losing money at the exact same rate, or how investments DO carry risk and DO go bad sometimes, and how the ability to FAIL is exactly what defines SUCCESS.  However, the difference in how a self-made fiasco  is handled is striking.  Own your mistakes as soon as you recognize them.  Mea Culpa and move on.  It's the right thing to do.

An article hit the web today, about Scott Thompson, new CEO at Yahoo.  It alleges lies or errors were made about Scott's education credentials.  Apparently, this was a Board directed search team's hiring decision, without assistance from a Search Firm -  and perhaps the vetting wasn't as complete as it should have been.
http://www.usatoday.com/money/industries/technology/story/2012-05-03/scott-thompson-yahoo-degree/54732858/1

Regardless of what anyone says, or any seemingly harmless 'oops'....Yahoo isn't well served by this tempest, if only in a teapot.  It damages credibility.  It hurts morale.  It creates gossip.

Here is what we know about sensitive hires, or quite frankly, any hire -  Vetting counts.  Trust but verify.

In 13 years doing Executive Searches, our policy has always been that every candidate we are sending into an interview has been vetted and verified on educational credentials before the interview takes place.   Why to we go to that expense and effort?  Because our clients reputation, and our reputation depend on accurate information used to make decisions.  And frankly, it's not all that uncommon to find lies in this area....sad but true.

It's just how we run our business.  Some people didn't check out - they lied, or embellished (which is the same as lying).  Some mistakes were caught and corrected before anyone got egg on their faces...in Yahoo's case, there's some egg, which is damaging to the company's image.  Don't risk damaging your image.  Don't go it alone.  Professional Search Firms can be a company's greatest asset, when evaluating their greatest assets - People.

My staff and I work with Boards on C-level searches and with nearly every other level of people on talent selection every day.  Give me a call if you'd like to improve your team's hiring record!
Eric Myers
815-929-1900 x11
Posted by Eric at 2:27 PM No comments:

It’s not about you, dude. It’s about them.


Our candidates AND clients hear this all the time.  You can use this idea in a lot of circumstances, but in this context it’s most relevant in Interview preparation and Resume writing.

Let’s take the Resume for example, from a candidate’s point of view.  I never recommend having an ‘Objective’ on a resume.  Why?  Because the reader (your potential boss) simply doesn’t care about your objective, he cares about his own objective -  “Can you solve the problem I have?”   A well written resume, from a strong candidate, shows a range of examples of achievement which could be recreated for a new employer.  Does your resume just show that you know stuff, or does it show that you solve problems for other people?

In an Interview setting, a very powerful strategy is to answer a ‘meaty’ question by telling a story.  Short.  Complete.  Detailed.  At the end of this story, wrap up by creating dialogue with the interviewer by inviting her to comment -  “Did that answer your question?”   “Is that similar to the objectives you’d like to tackle first?”   What we’ve done here is to emphasize some of the focus on the Interviewer and her company’s objectives, instead of just playing verbal ping-pong and keeping the focus solely on you!  Are you telling stories that they can relate to?

Let’s try this from a hiring company’s point of view –  Sure, you’ve got an open position, and in an era of high unemployment, there must be a million people who want it, right?  Guess what.  It’s not about you, dude.  It’s about them.  If you just want a warm body, keep the focus solely on yourself.  If you expect to hire someone really good – an A-Player – you’ve got to focus on them too!    Here’s a strategy that can get your candidates more engaged:  About halfway through the interview, let the conversation soften a bit, and ask the candidate a telling and powerful question -  “If you were to accept this position and start working here, what’s in it for you personally and professionally?”  Then sit back, be quiet, and use good active listening skills.  This is where you’re going to get the most valuable information of the entire session!

Asking a human being to trade their time and effort for money and benefits is partly transactional, and very very personal.   Make sure you’re addressing both parts.

The Myers Group Inc. is PROUD of it's staff!  We congratulate 13 year Account Executive Donna Meredith on achieving the prestigious AE of the Year award for 2011! 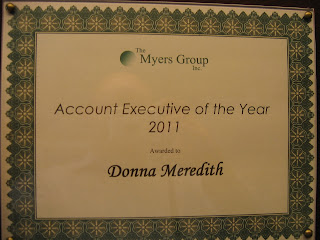 Yet another Milestone for the firm, as we collectively made 2011 a RECORD year! Donna Meredith, Sandra Frenzke and Lisa Gentry each qualified as Pacesetters - this puts them comfortably in the TOP 5% of Recruiters.  While in most years, we have 1 or more Pacesetters, having 3 of us make it is a pure example of dedication to the practice, strong client relationships, and great personal drive. 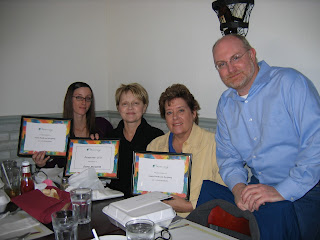 YMMV.  Yet another useless article on the employment market. People, not companies, hire people, and only when the hire does at least 1 of 3 things - Makes Money, Saves Money, and most importantly, Solves a Problem.  Wonder why so many people don't get hired in a down economy?  It's really simple - the decision maker cannot see clearly any one of the three reasons for the hire.
Posted by Eric at 2:52 PM No comments:

Today and tomorrow, 12/28 and 12/29 between 9 and 4 Central time, we're running our annual open Call-In "Ask the Headhunter".  This is a more casual environment than your typical interaction with a Recruiter.  It's another way for us to help people, and give back, setting a positive tone for the upcoming new year.  Call in number is 815-929-1900 x 11.


A new year is a fresh start.  You have new goals, a new outlook, a chance to refine, or even reinvent! Time for a resume refresh?  Time to enhance or simplify your interviewing style?  Time to change your networking strategy? We can bounce these ideas and more around with you.

Surveying the Team:
Remember all of those goals you set for 2012 in the last month or 2?  Now you've got to get there.
There are a lot of companies ‘re-architecting’ their teams now.   The most interesting trend I’m seeing in that regard is a significant change in the Best Practice of Force Ranking.
This labor landscape is radically different today than it was even 6 months ago.  This economy is brutal and it’s hard on people.   Which role is most critical?  Which player is strongest?  Who is moving ahead and who is falling behind?   More of the same just isn’t an option according to the people I talk with…too much at stake.
This is a collection of what I’m hearing from the best run businesses:
Force Ranking Your Team.  The exercise starts with taking an objective 30,000 foot look at the group you lead, including yourself.
Top Talent - listen up!
If you’re thinking about the architecture of the people running the business, feel free to reach out and we’ll be more than happy to help you benchmark.  The unique point of view that a niched search consultant gets is one of the biggest values we bring our clients and our candidates.  Without breaching confidentiality we can give you insight into the skills, experience, education, salary, and importantly talent attraction techniques that build world class teams.
Posted by Eric at 1:13 PM No comments:

Eric
The Myers Group Inc. is a professional executive search firm. We provide a broad range of executive and management search services for clients throughout the US and worldwide. The firm and our staff have won numerous awards for excellence including global recognition. Our clients range from small and midsized companies primarily in North America to very large global organizations.